Muhammad, Free Speech and the European Court of Human Right.

Just recently, a EUROPEAN court has ruled insulting religion is a criminal offence after a woman who is identified as called Mrs S, called the Prophet of Islam, Mohammed a paedophile had her conviction upheld.

The European Court of Human Rights (ECHR) ruled that Mrs S, was convicted by a lower court in Vienna for disparaging religious doctrines and was ordered to pay a 480 euros, that is about $546 as fine plus legal fees. Even though she appealed, her case was thrown out by the Court of Appeal in the Austrian capital as well as the country’s Supreme Court. The rulings can be read and download here.

Mrs S, who is actually 47-year-old from Vienna was reported to have held seminars where she made the comments while debating the marriage between Mohammed and Aisha, a six-year-old girl. Aisha according to Islamic history is one and the favourite of the Prophet’s wives, she was 6 year old when Muhammad married her.

Mrs S in one of her seminars was reported to have said: “A 56-year-old and a six-year-old? What do we call it, if it is not paedophilia?” She was also quoted to have said Muhammed “liked to do it with children”. She was actually convicted for insulting Muhammad in February 2011 by the Vienna Regional Criminal Court and the ECHR recently upheld their decision. END_OF_DOCUMENT_TOKEN_TO_BE_REPLACED

Bart Ehrman vs the Muslim Scholars

Bart Ehrman had become an household name within the fold of Islam, and it continually grows like wildfire. Since some Muslims have taken Bart Ehrman as their Go-To Person when talking about the Bible or Christianity as a whole, in this video, we examined the responses Bart Ehrman could have given to Muslim Scholars who attacks the Christians faith thereby refuting their arguments.

In this video, I show a few arguement used by Muslims Scholars that if Bart were to respond to would have been thrown under the bus and considered embarrassing as well. I hope my Muslim friends learn from this and not repeat these weak and lame arguements.

Paul Williams, the creator of the Muslim Dawah site Blogging Theology and a regular speaker at the speaker’s corner seems to be making a decision to leaving Islam.

In his own words on his twitter handle, this is what he has to say; 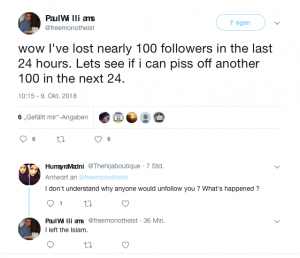 END_OF_DOCUMENT_TOKEN_TO_BE_REPLACED

Upcoming Debate: “Was Jesus Prophet, or Son of God?”

Douglas Jacoby is set to debate Shabir Ally again on an interesting topic. The duo previously had a debate some years back, and they are coming back to do it again.

They will both be debating a crucial subject, one Shabir Ally had previously debated David Wood, below are the details of the debate;

Details of the Event.

Topic: “Was Jesus Prophet, or Son of God?”

Gracefully enough, the event will be live-streamed, so you can watch the live below:

A Little About Douglas Jacoby

Douglas Jacoby is an international Bible teacher. After serving as a minister on church staff for 20 years, in London, Birmingham, Sydney, Stockholm, Philadelphia, Indianapolis, and Washington DC, Douglas has worked as a freelance teacher and consultant. He has engaged in a number of debates with well-known atheists, imams, and rabbis. Douglas is also an adjunct professor of theology at Lincoln Christian University. Since the late ’90s, Douglas has led annual tours to the biblical world.

With degrees from Drew, Harvard, and Duke, Douglas has written over 30 books, recorded nearly 600 podcasts, and spoken in over 100 universities, and in over 500 cities, in 120 nations around the world. The Jacobys have three adult children. Douglas and his wife, Vicki, reside in the Atlanta area.

A Little About Shabir Ally

holds a B.A. in Religious Studies from Laurentian University in Sudbury, Ontario, with a specialization in Biblical Literature. He also holds an M.A. and a Ph.D. from the University of Toronto with a specialization in Quranic Exegesis. He is the president of the Islamic Information and Dawah Centre International in Toronto where he functions as Imam. He travels internationally to represent Islam in public lectures and interfaith dialogues. He explains Islam on a weekly television program called “Let the Quran Speak”. Past episodes of this show can be seen online at: www.quranspeaks.com.

Support Us on Patreon

acts 3:13 Adnan Rashid and the Crucifixion in the Qur'an. adnan rashid on the crucixion aisha the child bride Andy Bannister Asif Sheikh bart ehrman and islam crucifixion in the quran daddy freeze and the quran deity of Christ Gospel accounts and Quranic narratives how can Jesus be god? How can Jesus be God if He Himself Worshiped God? is jesus a servant? is jesus a son or servant of god is muhammad the comforter? is the injeel a book? james white and zakir hussein debate jesus and the injeel john 14:16 muhammad in the bible muslims and the crucifixion oje giwa amu oyebola feranmi parallel quranic narratives Paul and Muhammad Paul and Muhammad Compared Quranic Narratives Rabbi tovia singer and muhammad refuting unitarianism salat in the bible sam shamoun sam shamoun is jesus god sam shamoun respond to tovia singer Shabir Ally study quran Taiwo ademola refutes Reno omokri the age of aisha the age of rebecca in the bible Tovia Singer Trinity Unitarianism was aisha 6 or 9 was jesus crucified? what is the injeel?