Since this is more of an historical issue rather than theological, Muslim apologist have been offering different kinds of explanation to justify the reason why the Qur’an denies the crucifixion. There is no doubt that there have been conflicting views and explanations for Qur’an 4:157 from different Muslim Scholars, the views are so divergent such that it is impossible to say that there is “the Muslim view on the crucifixion” rather could be more appropriately termed “a Muslim view on the crucifixion.”

If you are interested in the presentation I made on some of the conflicting Muslim views on the crucifixion, you can check out my video here.

One of the Muslim Dawah preacher who have been making efforts to discount the crucifixion event is Adnan Rashid. I had an interaction with Adnan last year on the crucifixion and he made  profound remark, please note the words I put in bold, he said and I quote

Seasoned Apologist, we believe Jesus was definitely not crucified due to the Quranic narrative. We believe the Qur’an is the word of God. Our belief in Jesus is not due to historical record, there is little on Jesus historically. There is no evidence for Jesus in the first century. I hope you get my point.

Here is the Screenshot of the conversation for those interested, 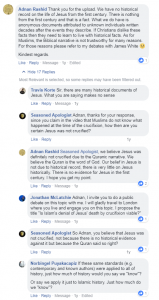 One of the things that is very startling in Adnan’s statement is how certain he sounded when he said that they “know Jesus was not definitely crucified” even though he was heard when talking on this same subject saying “we do not know what happened at the time of the crucifixion”, you can watch the clip here, how on earth can someone utter this and still come out saying he is certain Jesus was not crucified?

Also interesting is the fact that Adnan Rashid admitted in his debate with Dr. James White that the historical records available to us all says Jesus was crucified,

Here is the reason why Adnan statement in the screenshot above that “Our belief in Jesus is not due to historical record” and the reason is simple, historical datas are not friendly and does not support the Quranic position, so against all the historical data, Adnan choose the Qur’an and what Allah says over an historical event!

We can see clearly, that the main reason why Adnan, and by extension all other Muslims rejected the crucifixion event of Jesus is not because of the lack of historical data, but because it was denied by Allah, and Adnan had to choose Allah’s word over history.