Bart Erhman has become the go-to person for most skeptics and Muslims who are looking for what they think is a reliable source of information on the corruption of the New Testament to engage the Christians with, quotes from his book are used in debating and engaging Christians on this subject.

However, Bart Erhman recently made a post that the author of the Gospel of Mark “almost certainly was not” a Jew, a post he has eventually deleted from this blog, offering an apology for his mistaken and erroneous claim. Deane Galbraith did a good job in pointing out the reason why this was erroneous in his blog post which you can read here

Here is what Bart said on his blog in his apology to his readers;

In response to my post yesterday about whether the author of Mark was a Jew, in which I said no Jew would make the claim that Mark does, in chapter 7, that “all Jews” washed their hands before eating — a claim that is simply not true — a couple of astute blog members have pointed out  that there is another text, certainly written by a Jew, the Letter of Aristeas (about the how the Septuagint — that is, the Greek translation of the Old Testament — came into being), from the first century BCE or earlier, says something very similar about “all Jews” washing their hands.  Hmm….   I’ve only read the Letter of Aristeas about 75 times.  You’d think I would have noticed that.  But alas.

So, for the first time in recorded history, I’m going to cover and atone for my abject shame by removing the post.  Ugh.  Many apologies for the false information, the fake news, and the alternative facts.

What is most interesting about this is what makes the headline of Bart’s new post about his claim, which he retracts when apologizing to his reader, the headline read something like  ‘Don’t Trust What You Read!’ This is exactly how Ehrman worded the heading of his apology to his readers, is that not interesting indeed?

Since many Muslims and atheist including the skeptics had taken Erhman as an authority, they accept what he says hook, line and sinker, all because they needed an authority they could quote as an attack against the reliability of the New Testament, it does not matter if the claim itself is weak or nonsensical, what matters is that it is coming from a Scholar of the Bible (in this case Bart Ehrman), and that settles it.

For the curious and thinking mind, isn’t it time that some of Ehrman’s readers accept the fact that Ehrman is only human, who though being a Scholar is prone to many mistakes and errors? In recent times, Bart has bee changing his mind on many claim he has made in the time past (which in and of itself is not negative) and is expected of any honest individual, but what is more troubling is that fact that, if Ehrman has not come out to say he has made a mistake or has not realized his error, it is still stands among those who he teaches through his materials. 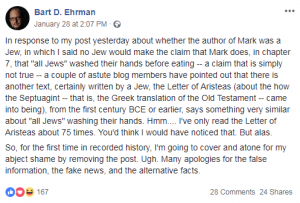 I have personally read responses from his die hard fan who when Ehrman is being corrected on a particular matter, since he hasn’t come out to say it is wrong, still maintained that Erhman is right! A good example can be seen in the comment section below this short. In the light of all of these, Erhman’s responses and apology should force both the Muslims and skeptics to think about any claim he makes, and this is not for Ehrman alone, but for the claims of Christian Scholars as well, and Scholars in general.

Bart has changed his views on a number of his claim, one of his very popular view which he held for a very long period of time was that, it was only John’s Gospel that portrayed Jesus as divine while on the other hand, the synoptics (Matthew, Mark and Luke) never did. Unfortunately for those who have not been keeping up to date, Bart has changed his view on this, this article written by James Bishop did justice to that since he also referenced Bart.

Instead of relying on Ehrman, since he known to be one of the foremost NT Critic of the 21st century and accepts all that he said about the New Testament, Erhman’s fans should take his advice and shouldn’t just trust what they read but rather examine those claims and see if they are indeed true, reasonable and rational.

Beyond all of these, the question remains, what are other key things or claim had Ehrman been alluding to and were wrong but due to the fact that he has not been keen to observe were wrong? How many of his claim are still being repeated in his books, used in his debate and talks are actually downright erroneous but since he has not noticed them well enough (even though he had been called out on some of those) are still be extensively been used as a valid argument in the public space today?

I personally think that if Ehrman listens to his critics well enough, some of his claims which took him months or sometimes years to retract would have been noticed early enough as with case we are addressing here, and dismissed as well. Again, it is a reminder that, even Scholars are human and they make mistakes, and instead of this being Ehrman for the first time in recorded history, we will see a continued admittance to owning up some of the misconception and misinformation that he has chunk to his readers over the years for a better understanding and balanced view.