This argument has gone viral like wild fire, no thanks to the late Ahmed Deedat who also made this popular in his publication, and without investigating this issue, most Muslims believed that this was the position of the Jehovah Witnesses. In this article, you will not only learn and discover that this is nothing but a misrepresentation of what the Jehovah Witnesses published, but a misunderstanding of the study of Textual Criticism as well.

The Jehovah Witnesses published an article in their journal called AWAKE! on the 8th of September 1975 with the title “50,000 Errors in the Bible?”

The very first thing you do notice right off the bat is the titling. This is quite different from what the Muslims or Atheist would present to you, they often tell you that the JW professes that the Bible contains 50,000 Errors,  however, this isn’t what the JW are saying, instead, they are making an attempt to refute that notion.

What the JW set to do in this publication is to prove that the Bible is authentic and does not contain 50,000 thousand errors as claimed by the gentleman they are responding to in the article.  I have included the image of the said publication in question for easy assimilation and verification. 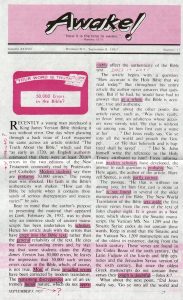 Even though the JW believed the bible is still in it pristine form without the alleged error ascribed to it, they JW believed that translations like the King James  and that of the Catholic Douay Translations were the reference point of the writer as to the text which contains these errors.

So, having realized what the background was, lets talk about the main theme of the Journal.

What’s the Journal About?

The main purpose of the Journal as published by the JW is to show that the Bible is authentic and that its no doubt reliably God’s word. The JW noted that these errors have been corrected by Modern translations of the Bible, and there is no need to be worry about this, the question remains, what exactly were these errors?

Discussing Textual Variants
One of the most important subject in the field of Textual Criticism is the textual variants. Textual variants take place when a copyist makes deliberate or unintentional alterations to a manuscripts that is being reproduced.

So, we are talking about errors, mistakes or alterations that scribes makes when copying a manuscript. This is nothing new, and has been recognized by textual critics as something that all ancient documents which were hand copied goes through. Just recently, Dan Brubaker released his book on the 20 corrections in the earliest manuscripts of the Qur’an, detailing examples of mistakes that scribes copying the text of the Qur’an makes,  so this is not a new phenomenon. You can check out the video Jay Smith and Al Fadi on this here. 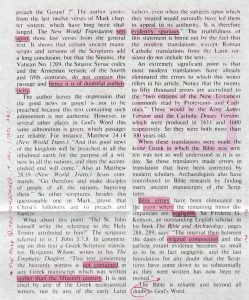 It is very important that most of these errors made by scribes which results into variants are very minute and does not affect the core of the Christian faith. Some of the errors are spelling mistakes, word orders, repetition of words and omission.

However, there are three text which were also mentioned, two (Mark Mark 16:9-20 and John 7:53–8:11) out of which remains a debate Scholars while one of them (1 John 5:7) has not been recognized as a later addition. Again, as stated, these two textual variant, namely; the longer ending of Mark and the Pericope Adulterae does not in any way affect the core essentials of the Christian Faith.

It is important to note that while the JW are making a case for the reliability of the Bible in this journal called AWAKE, they also promoted their translation of the Bible, the New World Translation.

In conclusion, the argument of the Muslims and the misrepresentation of the JW witnesses publication in an attempt to undermine the reliability of the Bible is not only cheap, but also an evidence of the misunderstanding of the manuscript tradition of the Bible.