However, my observation over the period of time is, whenever this topic is being discussed, neither the Christian nor the Muslim speaker usually make reference to the Qur’an as to show why Muhammad was not the Comforter, could this be because the comforter was promised in the Bible alongside his characteristics as well?

So, I keep asking myself, is the Qur’an really silent on this subject, and what I discovered was contrary to my long held believe. The Qur’an actually has something to say about this, and we shall examine this in this article.

Before we take a look at the stand of the Qur’an on this matter, some Muslims in the academic circle have recognized how it is painfully obvious that Muhammad cannot be referred to as the comforter Jesus promised.

In a Scholarly and highly academic work published late last year called the Study Qur’an, which comprise tafsir (Interpretations) from the top and classical Scholars of Islam from different sect and School of thought, here is their submission on Qur’an 61:6, a verse the Muslims believed Jesus actually spoke about someone to come after him as Muhammed:

——————-
Some Muslims have likened Jesus’ reference to Ahmad here in the the Quran to the reference to the Paraclete (Gk. Parakletos) or Advocate of whom Jesus speak in the Gospel of John 14:15-16: “If you love me, you will keep my commandments. And I will ask the Father, and He will give you another Advocate, to be with you forever;” (See also John 16:7-14; AI, R) Such an interpretation is however complicated by the next verse, 14:17, where the Advocate or the Paraclete is sad to be the Spirit of truth, whom the world cannot receive, because it neither sees him nor knows him. You know him, because he abides with you, and he will be in you” and by 14:26, where the Advocate is again equated with the Holy Spirit.

We are aware that not too many Muslims are happy with this submission and will dismiss this at a jiffy, but, aside the submission, are the evidences from the Qur’an that indicates that Muhammad was not the Comforter Jesus promised? Let’s take a look at the data.

THE CHARACTERISTICS of the Comforter.

Jesus, who promised the Comforter gave unique idiosyncrasies of the personality he promised how he can be easily distinguished from any other who might want to lay claim to this. It is obvious that Jesus knew that there would be time, when some persons or group of people will assign this characteristic to other individual apart from the comforter, so, he saved us the stress and give it all out.

1. The Comforter will be sent in the name of Jesus.

Jesus told his disciples and those who might want to examine this matter today that the comforter will be sent in his name, and not in the name of any other. We read:

But the Comforter, which is the Holy Ghost, whom the Father will send in my name, he shall teach you all things, and bring all things to your remembrance, whatsoever I have said unto you.

Now, this is very important, why would Jesus say this? Why is it important that the comforter be sent in the name of Jesus? whats so unique about the name?

The significance of a name is seen throughout the Hebrew scriptures and it is very important to the Children of Israel. They will only regard an individual who comes in the name of the Lord, their God and none other, they know the implication of dealing with people who operate and come in the name of other gods.

Remember what the Jews say to Jesus when he came into Jerusalem on a donkey? they chanted “blessed is he that came in the name of the Lord” (Matthew 21:9)

The Qu’ran and the Hadith answer this question. In Qur’an 96:1 which happen to be the first revelation of Muhammad, we are told:

Read! In the Name of your Lord, Who has created (all that exists),

2. Muhammad did not KNOW Jesus’s Disciples.

Again, the greek word for know in the verse γινώσκω ginōskō here is what it mean in the Strong Exhaustive Lexicon:

to “know” (absolutely) in a great variety of applications and with many implications (as follow, with others not thus clearly expressed):–allow, be aware (of), feel, (have) know(-ledge), perceived, be resolved, can speak, be sure, understand.

This give an idea of a personal knowledge, to have a feel of and can even interact as well. So, how do we conclude that Muhammad is known by the disciples of Jesus when none of this occurred?

But the Comforter, which is the Holy Ghost, whom the Father will send in my name, he shall teach you all things, and bring all things to your remembrance, whatsoever I have said unto you.

What Jesus is saying here is that, the comforter is in total accordance with him, and expound on the teaching he had given to the disciples and also remind them of some certain things they could not really understand or grasp while he was still them.

When therefore he was risen from the dead, his disciples remembered that he had said this unto them; and they believed the scripture, and the word which Jesus had said.

Now, we ask, how can Muhammad REMIND the disciples of what Jesus has said when he never met them in the first place?

Please note, Jesus said the comforter will remind the disciples of what he had taught them, this implies that he will not contradict his teachings. Did Muhammad really fit into this, let take a look at a few verses.  Jesus, when interacting with the religious leaders told that the there will be no marriage in the resurrection, and the idea of sex in heaven was out of the discussion, he plainly told them that believing in this will only mean they have erred, if Muhammad was indeed the comforter, he wouldn’t contradict this teaching, rather, he will remind this disciples of it.

We read in the Qur’an:

And give glad tidings to those who believe and do righteous good deeds, that for them will be Gardens under which rivers flow (Paradise). Every time they will be provided with a fruit therefrom, they will say: “This is what we were provided with before,” and they will be given things in resemblance (i.e. in the same form but different in taste) and they shall have therein Azwajun Mutahharatun (purified mates or wives), (having no menses, stools, urine, etc.) and they will abide therein forever.

4. Convict The World of SINS!

Another important characteristics of the comforter is that, he reprove the world of her sins, this implies that the comforter exposes the sinfulness of the world and rebukes it, in order to implement this effectively, he must not be a sinner. A sinner cant reprove another sinner. Jesus also mention how that before you remove dirt from your brother’s eye, you need to remove the log from yours.

While he was alive, Allah would ask him for ask forgiveness for his sins and that of the Muslims, we read:

So know (O Muhammad SAW) that La ilaha ill-Allah (none has the right to be worshiped but Allah), and ask forgiveness for your sin, and also for (the sin of) believing men and believing women. And Allah knows well your moving about, and your place of rest (in your homes).

If the comforter is a sinner, and struggles with sins, how then will he reprove them world of the very same thing he had problem with? Muhammad does not fit into this characteristics, we are told he was a sinner and in fact, an ahadith literature mention the fact that he would also ask for the forgiveness of his sins until his well became swollen.

Narrated By Al-Mughira: The Prophet used to offer night prayers till his feet became swollen. Somebody said, to him,” “Allah has forgiven you, your faults of the past and those to follow.” On that, he said, “Shouldn’t I be a thankful slave of Allah)?”

How can Muhammad who struggles with sin, be the one to reprove the world of the same? As the saying goes, you cant give what you don’t have.

5. He will abide with you FOREVER.

If there is anything that clearly shows that all these attributes have been forced on Muhammad, this is it. Jesus clearly says that the comforter will abide with the disciples forever. This not only show the undying nature of the comforter but also show his deity.

If Muslims are laying this claim on Muhammad, they are indirectly saying that Muhammad is God, because, it is only God who possesses the nature that abides forever. Throughout the stay of the disciples on earth, the comforter was with them till their last breath!

Muhammad came into the scene, and like any other human, he died, his grave is still being visited till today. It will not only be blasphemous for a Muslim to say that Muhammad lives in him, it will also be considered to be shirk, as it implies that the Muslims are associating the attributes they feel only Allah has and then applied it to Muhammad.

And in fact, Allah plainly told Muhammad that he was going to die, just like humans die, and if Muhammad is dead now, how can he be said to be with the Muslims or the disciple forever?

Muhammad (SAW) is no more than a Messenger, and indeed (many) Messengers have passed away before him. If he dies or is killed, will you then turn back on your heels (as disbelievers)? And he who turns back on his heels, not the least harm will he do to Allah, and Allah will give reward to those who are grateful.

Verily, you (O Muhammad SAW) will die and verily, they (too) will die.

Jesus never told us the comforter will die, he said he will be with the disciples forever, this is another plain evidence that Muhammad was not the one Jesus promised.

Jesus while telling us about the nature of the Comforter told the disciples that, they wont just know him, but that he will dwell in them. Jesus saying this clarify what he meant when he indicated that the Comforter will be in the disciples.

Even the Spirit of truth; whom the world cannot receive, because it seeth him not, neither knoweth him: but ye know him; for he dwelleth with you, and shall be in you.

Note how this verse indicates the comforter will be in the disciples, this cannot be said about Muhammad because he is a human and cant be in another person. Again, only a superior being can do this, and this also disqualifies Muhammad as the awaited or promised Comforter Jesus spoke about.

Another important word is the word “dwelleth” its the greek word μένω me’-nō and it means; to stay (in a given place, state, relation or expectancy):–abide, continue, dwell, endure, be present, remain, stand, tarry (for), X thine own.

Looking at this carefully, we realized Muhammad was never at a time dwelling with the disciples of Jesus, and still not dwelling in the Muslims today.

We hope our Muslims friends will consider these characteristics and realize they have been lied to that Muhammad was the promised comforter while he is not. 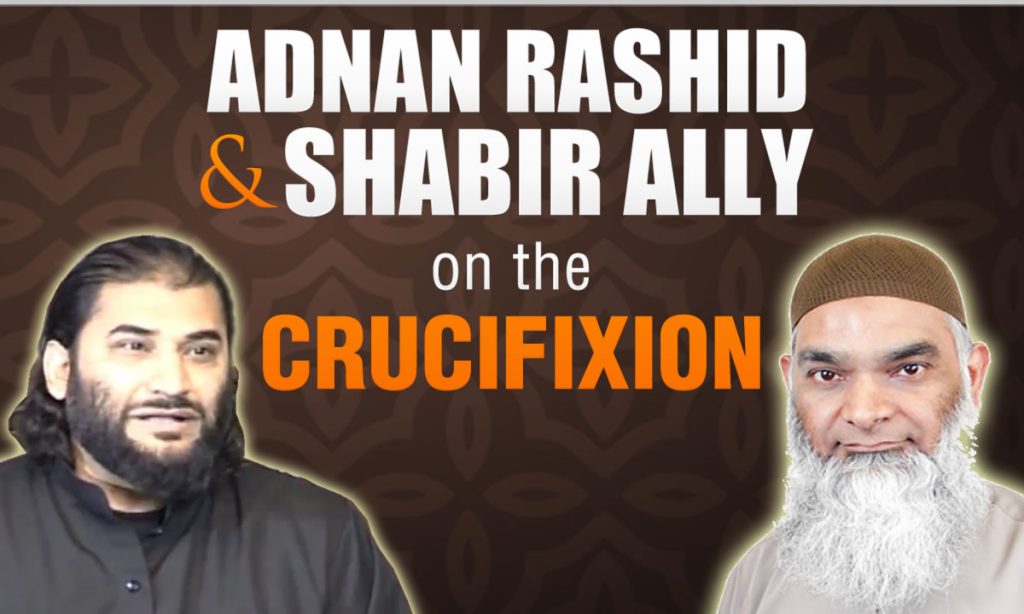 4 thoughts on “How the Qur’an Disqualify Muhammad as the Comforter Jesus Promised.”