Just before his passing, I have seen a couple of Muslims taunting and asking the question on why Nabeel Qureshi has not been healed and why is he going through so much pain, when in fact he also make mockery of Ahmed Deedat as well, thankfully Frank Turek did an excellent job responding to this sort of attacks in his recent article.

The hated filled comments I see before and after the passing of Nabeel is one of the most vilest I have ever since in my life (maybe I am yet to see more), considering how one talk about the death of individual irrespective of his religious backgrounds.

Interestingly, some of these comments are not only from “immature” Muslims as Yahya Snow would have us believed as written on his blog, but some of these hate rhetorics are supported by some of his friends and colleague in the Apologetical circles.

In his opening response to David Wood’s video on the last word of Jesus, Nabeel and Muhammad, Snow writes:

Perhaps a church elder can have a word with David in private. David Wood gets trolled by some immature Muslims who bash him over Nabeel Qureshi’s death and he does not like it. Understandable. David then goes on to make a video using Nabeel Qureshi’s death to try to attack Prophet Muhammad (p) all in an effort to fight hate with hate – the hared of some trolls with the hatred in his misuse of Nabeel’s death to attack the Prophet.

First off, this is not an attack on the prophet as Snow suggested, these sources are documented in the hadith narrations, we shall talk more about this in the future. Note how Yahya tagged these Muslims “immature”, well maybe in Snow’s word, one of his very close colleague and friend Yusuf Ismail maybe be one of such as it is evident he supported such attack on Nabeel Qureshi, the fb post below is a typical example of this, it was liked by Yusuf Ismail as well! 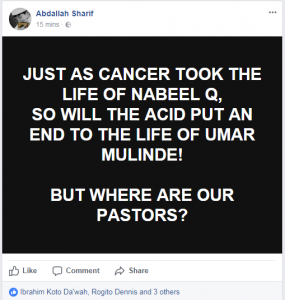 While on one hand, one might think Yahya is being “matured” for this comments, on the other hand, its seems he does not see them all as entirely “hateful” responding to a Christian brother, Yahya writes:

John Roberts Only some comments are hateful. MOST comments I saw were sensitive and thoughtful. For such an example see the SC forum and the relevant post and thread. The people trolling are kids. I’ve seen more mature and serious-minded comments from Muslims on Nabeel’s death than hateful trolling. I guess it depends on which side of the net you’re on – there’s a side which is a mess and is full of people of various communities who are trolling each other with whatever they can use to offend the other person. I don’t take that corner of the net as a representation of Christians nor Muslims. 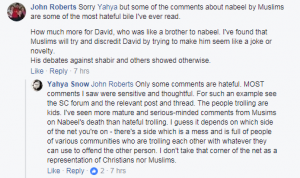 Now, why is Yahya here and there? Why does it seems on one side, he condemns the hateful comments and on the other hand he finds some of them thoughtful? Is the one Yusuf Ismail liked also thoughtful?

Finally, can Yahya Snow be accused of the same when he wrote on Blogging Theology, a website own by Paul Williams that Nabeel also mocked Deedat on his death? You can see a response to this here.

Now, we have seen those who directly attacked Nabeel Qureshi, some diplomatically do the same thinking they will not be caught doing this, while trying to be peacemakers within the communities, it is truly sad how these folks can go as far not only misrepresenting people all over the net space, also accusing others of what they themselves are guilty of.